The orthography outlined when we talked about the sounds of Klingon is the “official” writing system, designed by Marc Okrand when he invented the language. However, other alphabets have appeared in Star Trek books and movies. The most recent of these is usually attributed to Michael Okuda (though he just uses it), and is used in Star Trek: The Next Generation and the later movies when Klingon writing is needed. A copy of this font (not quite complete, as careful observation of the movies reveals) was obtained from Paramount by a fan. The sounds of tlhIngan Hol were mapped to this character set—who exactly did this mapping is unclear to this writer—and the resulting mapping is occasionally used by KLI members for writing Klingon. It should be noted that the movies and shows just use the characters randomly, for effect.

This character set is shown below. This picture was created using the TrueType pIqaD font made by Dr. Lawrence Schoen. The TrueType version, as well as PostScript Type I versions, are available for free for current KLI Members.

Note that there are no punctuation characters in this character set. It may be that Klingon doesn’t use punctuation, although a few of Okrand’s sentences do. Since Okrand doesn’t use the Okuda orthography, and neither does Okuda, for that matter (except just randomly selecting glyphs), if we accept it as “real” Klingon pIqaD we don’t really know anything about how it’s written. The convention has developed that it’s written horizontally, from left to right, like English, and usually each sentence is given its own line and centered (some follow this convention when writing the romanized orthography as well). 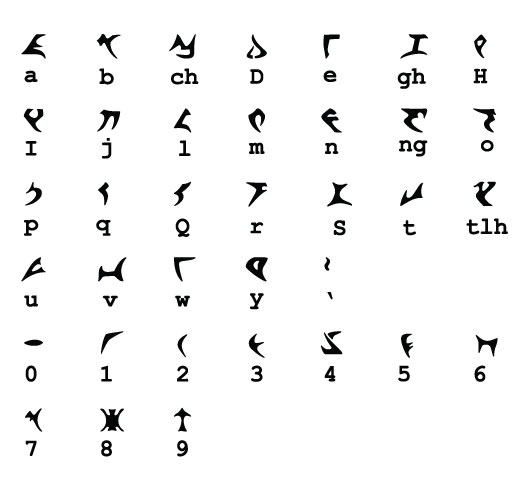 A more thorough treatment of the history of Klingon writing as we know it is available as a PDF file, reprinted from an issue of HolQeD.

This page was last modified on April 24, 2017 and is managed by: qurgh